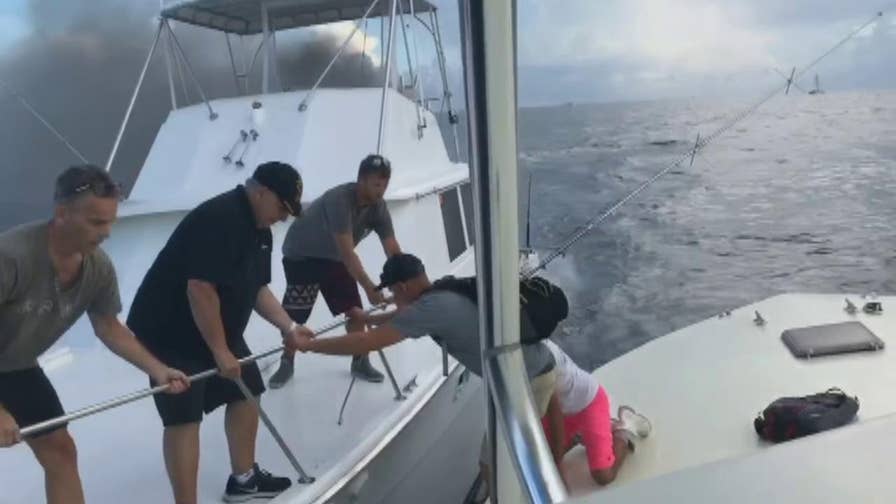 Raw video: The crew of a nearby vessel spotted the burning charter fishing boat off the coast of Fort Lauderdale beach and moved in to save the people onboard.

A group of good Samaritans came to the rescue of a group of people stranded in a boat burning off the coast of Fort Lauderdale.

According to the U.S. Coast Guard, six people were on board the 45-foot charter boat when it caught fire early Monday morning. A family visiting South Florida on board a nearby vessel saw the blaze and rushed to help the boaters to safety.

The Barriger family from Connecticut were fishing on the Lady Pamela II when they noticed the fire. “We were just out fishing for charter, and we heard fire,” said Good Samaritan Kate Barriger.

The boat that had caught fire was just a mile away from the Barrigers.

The fire began in the engine area of the boat before quickly spreading to the rest of it.

“I saw smoke coming out, and I saw guys scurrying around. I looked down at my mate, and I said, ‘I think that boat’s on fire,’” said Lady Pamela II Capt. Gene Checci. “When I picked up the outriggers to go get them, the boat was completely engulfed in fire, all the way up to the fly bridge, and all the people were out on the bow, so I just went around it, came up alongside the boat.”

“It went from smoke to fire within three to four minutes,” Checci said. “I’m telling ya, it was ridiculous.”

One person almost went overboard while trying to get onto the Lady Pamela II.

“Well the way with everything, the wakes and the rocking of the boats, they hit each other and he slipped,” Barriger said. “He caught himself, thank God.”

All six people were rescued.