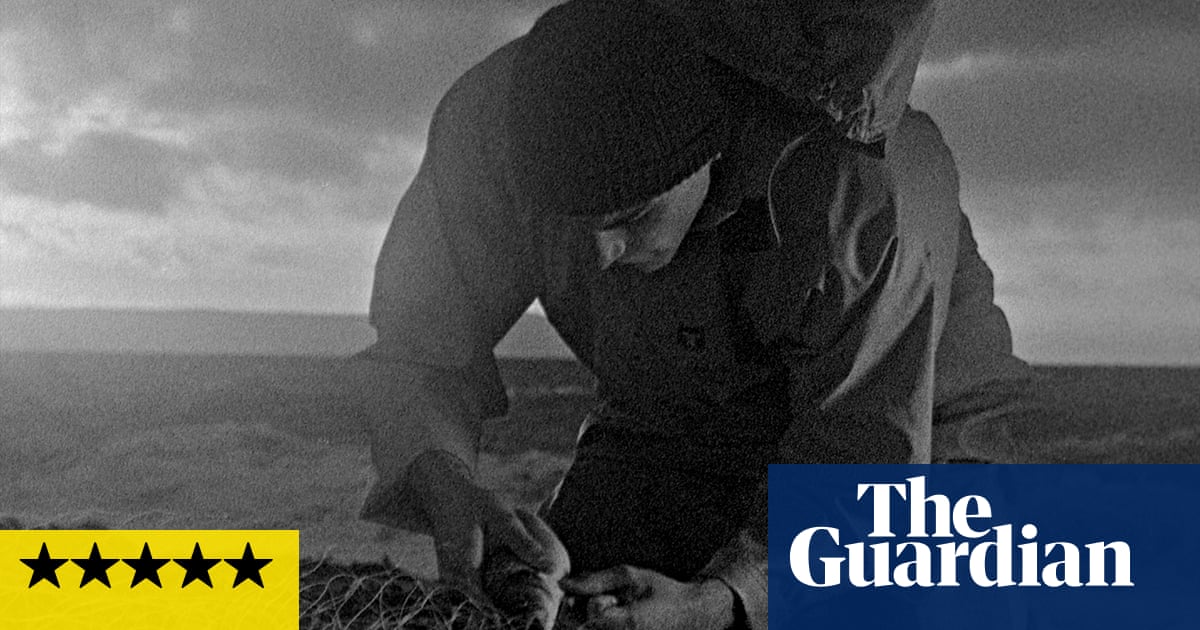 Cornish film-maker Mark Jenkin’s breakthrough feature is a thrillingly adventurous labour of love- a richly textured, rough-hewn gem in which form and content are perfectly combined. A refreshingly authentic tale of tensions between locals and tourists in a once-thriving fishing village, it’s an evocative portrait of familiar culture conflicts in an area where traditional trades and lifestyles are under threat. Shot with clockwork cameras on grainy 16 mm stock, which Jenkin hand-processed in his studio in Newlyn, Bait is both an impassioned paean to Cornwall’s proud past, and a bracingly tragicomic portrait of its troubled existing and possible future. It’s a genuine modern masterpiece, which establishes Jenkin as one of the most arresting and intriguing British film-makers of his generation.

Fishing-stock siblings Martin and Steven Ward (” Kernow King” Edward Rowe and Giles King respectively) are at odds. While the former still scrapes a living selling his catch of fish and lobster door-to-door, his brother has succumbed to the tourist trade, employing their late father’s boat to take rowdy, moneyed tourists on sightseeing journeys.” He’d be spinning in his grave ,” growls Martin, whose sense of betrayal has been worsened by the sale of the family home to incomers Tim and Sandra Leigh( Simon Shepherd and Mary Woodvine ). Now fishing nets have become chintzy decorations, the perfect accompaniment to a fridge stacked with prosecco.

Arguments about quayside parking and the noise of early morning sails (” I’m pretty sure it’s against the law !”) threatens to boil over into physical violence, but that doesn’t stop the Leighs’ daughter Katie( Georgia Ellery) from taking up with Steven’s ruggedly handsome son Neil( Isaac Woodvine ), to the horror of her friend Hugo( Jowan Jacobs ).” You didn’t have to sell us this house ,” insists Sandra during a confrontation with Martin, whose curt response speaks volumes:” Didn’t we ?”

Building on the promise of the powerful 2015 short Bronco’s House , which tackled Cornwall’s housing crisis, Bait receives the film-maker once again addressing pressing social issues with a profoundly poetic sensibility. As before, Jenkin shot Bait without voice, effectively creating a silent movie to which dialogue, music and sound effects were added later, excellently concertinaing a century of cinema history. The impact is bizarrely brilliant, lending a dreamlike quality to the dialogue, which transforms the spoken English into something weirdly reminiscent of a dubbed foreign-language cinema. It’s a disorienting consequence that highlights a central topic of Bait : people speaking in the same tongue yet failing to understand one another. Crucially, Jenkin doesn’t caricature the incomers, suggesting that they too have been sold a lie- a picture-postcard image of Cornwall as removed from reality as the enchanted highlands of Brigadoon .

While the post-synched speech has an alienating, Pinteresque theatricality, the rest of the soundtrack rises and falls like the tide, with Jenkin’s own synth drones weaving in and out of Daniel Thompson’s layered voice designs. At periods I was reminded of beatboxer Jason Singh’s mesmerising live vocal accompaniment, which I find in 2016, to John Grierson’s 1929 fishing documentary Drifters , an overwhelming experience that similarly bridged the gap between old silent film and modern immersive sound.

It’s the visuals, however, that lift Bait into the realms of timelessness and transcendence. Despite early success on video( his 2002 oddity Golden Burn won a first time director’s prize at the Celtic film and TV celebration ), the former promo-producer saw himself artistically becalmed and turned to celluloid to reinvigorate his passion for cinema.

As his preoccupation with physical movie stock flourished, so Jenkin’s vision became more focused, producing award-wining shorts like The Essential Cornishman and The Road to Zennor , which laid the experimental groundwork for Bait . Relishing the strange alchemical accidents and human thumbprints of home-developed celluloid, Jenkin has crafted a 21 st-century feature that carries within its DNA the evolution of the moving image, from Melies to Andrew Kotting via Robert Bresson, Lynne Ramsay and( in a roundabout way) the magical visions of Powell and Pressburger.

Having premiered to rapturous applause at the Berlinale in February, Bait appears set to become one of the defining British films of the year, perhaps the decade. Some have chosen to read it as a timely Brexit parable, although its roots and production predate the current crisis; clearly the fissures of the present run deep into the past. Personally, I think its appeal is more universal, although( as always) it’s by focusing on the specifics- the knots of a lobster pot, the ripped entanglements of a angling carry- that Jenkin manages to throw his net so far. I hope he catches the widest possible audience.