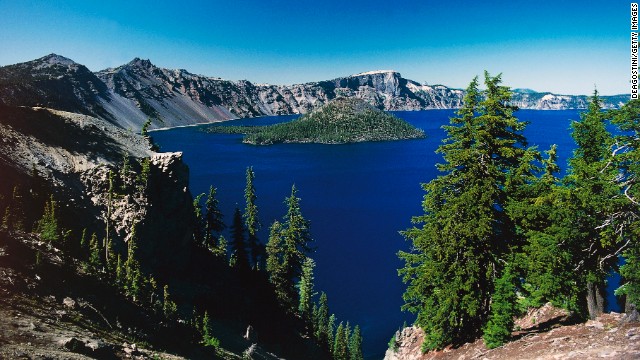 (CNN)Now more than ever, the natural wonders of our world are beckoning to us from behind gray computer monitors, buzzing cell phones and the million red brake lights ahead of us on the long commute home.

We yearn to leave the laundry, the dishes and the bills behind and swap them out for something bigger, deeper and taller than we could ever be; something that will, at once, make us feel insignificant and perfectly in place.
Pack your bags and wear comfortable shoes, because we’ve compiled a list of nature’s record setters in the United States that will make for great vacation memories.

Looking to be gobsmacked by nature? Visit Crater Lake in south-central Oregon. Created by the eruption and ultimate collapse of Mount Mazama more than 7,000 years ago, water filled the caldera, or ring-like indentation left after the explosion, creating the deepest lake (592 meters; 1,943 feet) in the United States.
In winter, snowshoeing expeditions give a peek into the wilds of this natural wonder. But make sure to visit this beauty in the summertime, too, when more of the Crater Lake National Park is accessible.
A two-hour trolley tour circles the rim of the lake and allows visitors four scheduled stops.
Hop aboard a summer lake cruise, weather permitting, and catch a glimpse of the famed “Old Man of the Lake,” a large tree stump that has been floating vertically in the cold water for nearly a century. Bicyclists rave about the 33-mile loop around the rim of Crater Lake, but be warned that the route features steep climbs and brilliant views in equal portion.
Crater Lake Lodge first opened its doors in 1915 and is a rustic, sweeping homage to the 1920s, complete with a Great Hall and oversized fireplace. It is open seasonally, usually May to October.

2. Largest living tree in the world

You’re going to need a very long set of arms to hug the largest living tree in the world.
Dubbed General Sherman after the Civil War general, this behemoth lives in the north end of Giant Forrest in Sequoia National Park, California, and towers about 84 meters (275 feet) high. At its base, this giant is about 31 meters (103 feet) around, roughly equal to fourteen and a half Shaquille O’Neals lying head-to-foot around the base of the tree.
Despite its impressive height and width, it is not the tallest or widest tree around. Instead, its distinction as the largest living tree is judged by the volume of its huge trunk — 52,500 cubic feet .
Sequoia and Kings Canyon National Parks lie adjacent to each other in the southern Sierra Nevada and make a wonderful playground, no matter the season.
In May, Crystal Cave, a large, naturally forged underground cave with stream-polished rock formations and large marble rooms, opens to the public. In the winter, book a room at the rustic John Muir Lodge, located just minutes from General Sherman, and take a cross-country ski trip into the snow-draped forests.
America’s most popular national parks are …

3. Lowest and hottest spot in the U.S.

If you’ve had it up to your hairline with ice storms and snow days, plan a getaway to the hottest, lowest place in the United States: Death Valley. It may sound like a depressing destination, but this place boasts some of the most adaptable plant and animal life on the planet.
Death Valley is 86 meters (282 feet) below sea level and was formed when movement in the earth’s crust along a fault line caused the land to sink.
From Telescope Peak, the highest mountain in the national park at 11,049 feet, to the Badwater Basin floor is nearly a two-mile drop, twice the depth of the Grand Canyon. The average rainfall for the area is less than 2 inches per year. A record high of 134F (57C) was recorded in Death Valley on July 10, 1913.
The park is open year-round, but guided ranger tours are available only in the cooler months from November to April, and they are a great way to learn more about the geology and history of this fascinating desert. Full Moon festivals, available in the cooler months of the year, give visitors the opportunity to see how this desolate landscape changes at night.
After a long, hot day of exploring the desert, check into the elegant Inn at Furnace Creek, a well-appointed resort with spa amenities, spring-fed swimming pools, an 18-hole golf course and stone patios with sunset views.
Spectacular wildflower bloom in Death Valley

If stargazing is your passion, you can’t get much better than Mauna Kea, a dormant volcano in Hawaii that, when measured from the ocean floor, is taller than Mount Everest, the world’s highest mountain by altitude. From its ocean-floor base, Mauna Kea measures more than 10,000 meters (about 33,000 feet) or a little more than six miles.
Historically, the summit of Mauna Kea has been considered a spiritual place to native Hawaiians and only royalty and tribal chiefs were allowed to visit. Today, the summit is still spiritually relevant for many people, but thousands of visitors make the arduous trip each year to visit observatories perched at the summit.
Every night, regardless of weather, the Visitor Information Station at the Onizuka Center for International Astronomy holds a free public stargazing program.
Book a room at the Shipman House Bed and Breakfast and relax in the sunny, privately owned Victorian mansion, complete with more than 20 tropical fruit tree varieties blooming in the garden.
22 spots for spectacular starry skies

If the rugged, wild terrain of Alaska is what your wanderlusting heart needs, book a trip to Denali National Park and Preserve in Alaska. This mammoth park — roughly half the size of Rhode Island — is home to the highest mountain (as measured from its base) in North America: Mount McKinley. The mountain is 6,194 meters (20,320 feet) high.
At night, if you camp anytime from August through May, you might glimpse the Aurora Borealis or Northern Lights. These vivid braids and streaks of light, sometimes red, sometimes green, can brighten the deep dark skies over Denali and take your breath away. Explore slabs of rocks that geologists have begun referring to as the dinosaur dance floors because of the high number of fossilized footprints they’ve discovered.
There are no National Park Service accommodations in the park, but you can find stellar digs at Camp Denali and North Face Lodge, two privately owned full-service lodges that feature guided outings and flightseeing tours.

6. Tallest natural bridge in the U.S.

The amazing natural structure at Rainbow Bridge National Monument in Utah is estimated to be more than 200 million years old, and it stands 88 meters (290 feet) tall. Rainbow Bridge is considered to be the highest natural land bridge in the United States, and its name hints at the unique color striations formed from layers of different types of sandstone which became hardened and fused together by wild fluctuations in the climate through the Triassic and Jurassic periods.
Geologists estimate that several million years ago heavy rains and a rising river gradient swept through the area, cutting wide swaths through the water-soluble sandstone and creating many interesting shapes in the landscape.
Today, most visitors gawk at the bridge from a viewing platform, but some folks may backpack along the Navajo Mountain trail once they’ve acquired the appropriate permit from the Navajo Nation.
Lake Powell, a reservoir of the Colorado River that straddles the border between Utah and Arizona, is relatively nearby and provides access by boat to the famous land bridge. One of the best ways to experience the spectacular landscape is to rent a houseboat and navigate Lake Powell via the more than 2,000 miles of shoreline.
In Utah, 5 national parks reveal a wondrous and rugged world

7. The sunniest place in the world

If you’re ready to trade in your parka and mittens for shorts and sunglasses, seek out a place where sunshine beams down 90% of the year. Yuma, Arizona, is the nation’s sunniest city and the least humid place in the United States, according to the National Climatic Data Center. It’s also the sunniest place in the world, according to the Guinness Book of World Records. Also, Yuma boasts the least number of days of precipitation in the nation: on average, 16 days per year.
Several side trips outside of Yuma are worth taking.
Bring your mountain bike and head out for an 11-mile trek in the Laguna Mountains area. Thirty miles north of Yuma is a must-see for history buffs: Castle Dome Landing is a ghost town and museum featuring 23 restored and recreated buildings, including a saloon and blacksmith.

8. Northernmost point in the continental U.S.

If the desert isn’t calling your name, and ice fishing sounds alluring, head for an obscure little corner of Minnesota called Northwest Angle Inlet. The locals call the township “the Angle,” and at 49.22 north latitude, it is the northernmost point in the contiguous United States. (Point Barrow, Alaska, is the northernmost point in all U.S. territory).
The only way to get to “The Angle” is to drive through Canada or boat through Manitoba Bay. The Angle is a fisherman’s paradise with plenty of walleye and bass, depending on the time of year you visit. Go on an ice fishing adventure with the Red Fox Ice Fishing Company and try out their heated fishing houses. They also rent private, lakefront cabins complete with a cast iron skillet perfect for frying up your catch. A nine-hole golf course offers a respite from fishing, and in the warmer months, berry picking is the activity of choice.
By contrast, if you’re hoping for warmer climes, try visiting the southernmost city in the continental United States: Key West, Florida. Its laid-back reputation and independent culture woos artists of all stripes, including authors Ernest Hemingway and Tennessee Williams, both of whom owned homes in the city.

The Grand Canyon in Arizona may be immense, boasting nearly 277 river miles in length, but for sheer depth, Hells Canyon in eastern Oregon, eastern Washington and western Idaho wins hands-down. At its deepest, the canyon plunges 2,452 meters (8,043 feet) from the tip of He Devil Peak to the Snake River. The deepest part of the Grand Canyon is a mere 1,829 meters (6,000 feet).
Hells Canyon was carved with the help of the Snake River which begins in western Wyoming, winds through the Snake River Plains, descends into the rocky Hells Canyon and eventually empties into the Columbia River. Make sure to view the Rush Creek Rapids from the majestic Hat Point lookout, the highest point of Hells Canyon on the Oregon side.
Follow the Hells Canyon Scenic Byway, a 218-mile stretch of winding road that slips through much diverse landscape — from the snow-tipped Wallowa Mountains to lush valleys. Book a night stay at the quiet, rustic Pine Valley Lodge in Halfway, Oregon.
You could spend a lifetime exploring the Grand Canyon

At more than 2,500 miles, the Missouri River is the longest in the United States, beginning in the Rocky Mountains of Montana, winding generally south and east before joining the mighty Mississippi River near St. Louis, Missouri. “Big Muddy” passes through seven states — Missouri, Nebraska, Iowa, North and South Dakota, Montana and Wyoming — and explorers Lewis and Clark nearly followed its entire length before realizing that the waterway stopped short of the Pacific Ocean.
Three Forks, Montana, where the “Big Muddy” originates, is a city worthy of exploration. Start your stay at the Sacajawea Hotel, a recently renovated historic building, and get your waders ready because Three Forks is fly fishing country. Soak in the beauty of snowcapped mountains and cold, blue waters teeming with trout.
Go canoeing in the headwaters and watch great blue herons fish near the banks. It’s not uncommon to spot a moose lumbering along in the distance. Check out the intricate limestone caverns lined with beautiful stalactites and stalagmites at the Lewis and Clark Caverns State Park, just 17 miles from Three Forks.
Spring road trip: Epic drive from Montana to Alaska
How to drive the ultimate American road trip
Mesmerizing photos: 50 states, 50 natural wonders